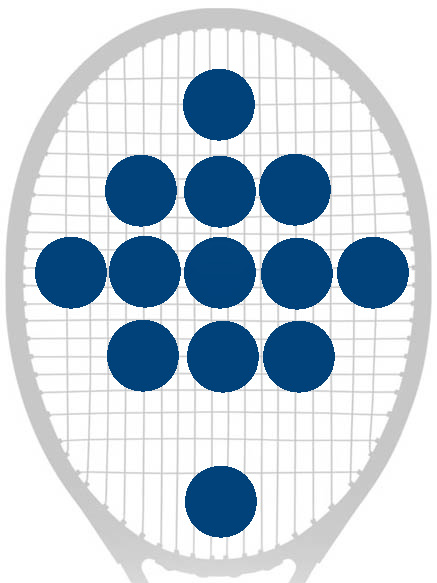 When a ball hits a stationary racquet, it bounces back at a speed that depends on the racquet's ability to rebound the ball. That ability depends on all the characteristics of the racquet such as weight, swingweight, stiffness, materials, and design. Each racquet has an innate ability to bounce the ball back. We call this the power potential.

Points near the racquet's center of mass (the balance point, located near the throat area) have greater power potential than those near the tip. That's because there is more "stuff" there to do the rebounding. In other words, the power potential is different at each location on the stringbed.

Racquet speed is not the same at each point on the racquet. As you move from butt to tip, the speed gets faster and faster. The racquet as a whole swings in a giant circle, but each point along its length traces out a different size circle. Points near the handle or the throat trace smaller circles than those in the center of the strings or tip. For example, imagine the racquet swinging around the very end of the racquet. As you swing through any given angle, every point on the racquet sweeps through the angle in the same time . However, the tip travels a greater linear distance than does a point farther toward the handle. In other words, the tip travels a greater linear distance in the same time as the throat, so it is moving faster. It is linear speed of the impact point that makes the difference in power.

Ignoring the messy details, the maximum shot speed occurs at a point where the speed of the bounce plus the speed of the bounce surface add to a greater amount than any other combination. For most shots, this location occurs near the center of the strings to a couple inches above that — just where you are used to hitting. How convenient!

What It Means to You