Note: the following information is associated with the Shot Maker program:

A racquet's power potential is determined in the lab by measuring ball velocities and calculating the ratio of the ball's outgoing bounce speed to its impact speed. The impact speed is defined as the combined speed of the impact location and ball just prior to collision.

Every point along the length of the racquet travels at a different speed. The speed continually increases as you move towards the tip. This is because the racquet swings in a big circle, and the tip travels a longer arc than the throat or the handle during the same amount of time. It is therefore traveling faster than throat which is faster than the handle. Tip speed (which you entered in the Shot Maker program) is used to determine the speed at any other point.

Swingweight. Measures the ease/difficulty of swinging in a forward arc around a vertical axis through the hand — i.e., swinging the racquet forward.

Twistweight. Measures the ease/difficulty of twisting the racquet around the central axis running from butt to tip.

Spinweight. Measures the ease/difficulty of swinging in an arc through an axis horizontal to the wrist — i.e., swinging vertically or in windshield direction.

For all three "weights" a higher number is more difficult to accelerate the racquet around the corresponding axis, but it is also more stable because the ball cannot move the racquet in that direction either.

The trajectories are to scale but visually do not do justice to variances in distance from 0-2 feet. Small differences in racquet power can make several inches difference in depth, but that is difficult to discern just looking at the trajectories. The distance comparison is a very intuitive way to compare racquets, all else being equal. The catch being that faster balls launch at lower angles and may or may not travel as far as a slower ball launched at a slightly higher angle.

Launch angle is measured against a horizontal line to the court. It is positive if the angle is above the line and negative if below. All other shot parameters remaining equal, the racquet with the higher power potential will hit the ball faster and at a lower launch angle. Less powerful racquets will launch at a higher angle. It is possible the two effects will cancel and the ball would land in the same spot. It is also possible that one effect will be greater than the other — for example the less powerful racquet (lower launch speed) launching at a higher angle and actually hitting farther. That's why it is sometimes confusing when talking about power. But power refers to speed not distance. Fortunately, most of the time, the more powerful racquet will hit both faster and farther, though not necessarily farther. 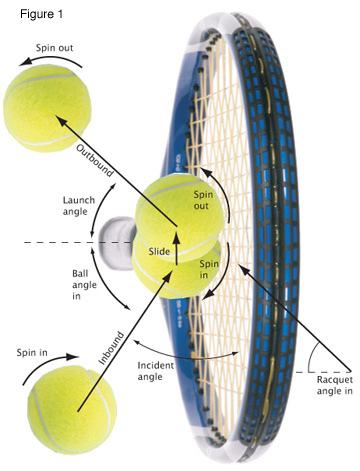 If you volley a ball, it may have an incoming spin of either backspin or topspin.

Whether you are swinging up into the ball or slicing down into it, you can launch with either topspin or backspin in each case. Surprising but true.

Also surprising: Every racquet with the same string hitting the same shot in the same way will have the same spin. Racquets do not have a direct influence on spin.

So, the launch for two different racquets with all else the same will show the exact same launch spin. It is assumed that the string type is the same for each racquet also. To date, the research data on whether string type influences spin has been contradictory, and further study is needed.

You can change the spin of an incoming ball a lot and still not have much to show for it. On the other hand, you can change it just a little, and get a whole lot.

The more topspin coming in, the more contact time is used up getting rid of the other guy's spin than is used creating your own topspin.

The reverse is true if you want to hit backspin. The more topspin coming in, the more backspin you will send back. This can cause the ball to float long. Increasing a ball's existing spin is easy, but it can be dangerous.

So, for two players swinging the same speed, the one who hits the first big topspin shot has the spin advantage. The other player will always be undoing the first player's spin unless he/she can swing faster and steeper than the other.

Change in spin most accurately reflects the actual result of your effort and technique. If there isn't much spin to change coming in, you will get more going out. If monster spin is coming in, your result might look measly, even though your change in spin was huge. 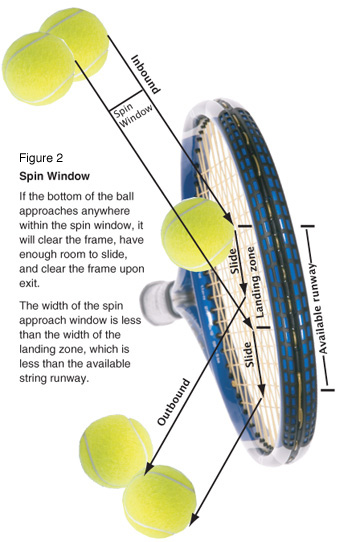 This is the maximum available approach window for the ball so as not to clip the frame coming in or going out and to have enough room to slide along the racquet face. The width of the spin approach window is actually less than the width of the string landing zone that it gives access to and also less than the total string runway available — but first you have to get in the window. The window varies according to shot characteristics, impact location, racquet width at impact location, frame height at impact location, and the angle of impact. Larger spin windows have greater room for error which increases reliability of and confidence in the shot, and thus encourages faster and steeper swings to increase spin.

To compare spin windows for racquets, make sure all the inputs are the same for each racquet.

To compare spin windows for different shots, change one variable at a time on racquet B and see how that effects spin window compared to A.

The spin window is the maximum approach window available — the amount if you just missed the frame as it approached the stringbed. But as long as the ball comes in anywhere inside this window and thus lands on the available string landing zone, you will have room for a clean hit.

The following variables will decrease the spin window and their opposite will increase it:

You can design shots on the Shot Maker program that only have an inch or less in which to approach and land. Is it any wonder that ridiculous spin is not easy to achieve?

How much difference does the spin window make? The racquet with the greatest spin window for a given shot has the luxury of being able to add extra tilt, swing angle, or speed and still present the same window to the ball as the racquet with a smaller window. An example will illustrate. Choose the following racquets: Racquet A: Babolat Pure Drive Roddick, Racquet B = Dunlop Aerogel 100. Choose the following settings for both racquets (from top to bottom): 4, 30, -5, 4000, 65, 30, 5, 21, 0.

You see that Racquet A has a spin window of 6.07 compared to B's 5.40 with a launch spin of 1035 rpm for each. How much difference does the window make? Experiment: The answer lies in altering the swing angle or tilt of racquet A (the racquet with the largest window) until its spin window equals that of racquet B and compare the spin results. For example, go to racquet A and change the swing angle to 45 degrees. This makes its spin window 5.41, about the same as Racquet B. But now the spin is 1787 compared to B's 1035. That's an increase in spin of 72% with the same spin window.

But notice that your new shot has more spin but less depth. So by trial and error I tried altering racquet speed, tilt, and angle to get the same spin window and same depth. Try changing swing angle to 33 degrees, tilt to 7.7 degrees, and tip speed to 97 mph. The result is launch speed of 96.4 compared to 72.5 mph; the spin is 2702 compared to 1035 rpm; the spin windows are 5.42 compared to 5.4 inches — essentially the same. In other words, the racquet with the bigger window can hit at greater speed, greater spin, same depth, and equal margins of hitting error. However, on this particular shot, there are 10 inhes less clearance at net, so I do pay for safety margin there, but still have over two feet clearance.

It is obvious that small differences in spin window size can make big differences in spin potential and still provide the same margins of error on your racquet. Thus the extra window allows you to increase your percentages and or results without any extra risk compared to the racquet with the smaller window (though you have to alter your shot such that you still have safe margin at the net).

Most of the time the angle of impact will be "falling" (even if you are hitting the ball on the rise). However, the angle can be "falling" or "rising" onto the racquet. Often the angle may surprise you because it appears contrary to visual perception of the event. But it is very important to determine this impact angle because it (along with speed and direction of the ball bottom) is the major factor in which direction friction is going to work to affect the spin of the ball.

So, an impact angle of 80 degrees, either falling or rising will be almost perpendicular to the string face. An impact angle of 10 degrees would be a grazing impact against the back of the ball.

This last point is important: the greater the speed of the bottom of the ball relative to the strings, the longer friction will operate during impact and the more change in spin that will occur. Swinging at a steeper angle, tilting the racquet, or swinging faster will all increase the relative speed of the bottom of the ball to the strings. Thus they all increase the change in the spin.

Friction can actually reverse itself several times near the end of the impact. This is complicated and we won't deal with it here. Suffice it to say that most of the time the net effect will tend to cancel out.

Effect of friction on ball

The ball will slide and roll across the stringbed. The greater the speed and angle of the ball relative to the strings, the greater will be the slide distance during contact time. The more the slide room needed, the smaller the spin window will be, and vice versa.