The whole point of a racquet is to hit the ball. A racquet's power potential value tells you how well the racquet does its job. Power potential tells you how effectively all the racquet's other properties — weight, balance, swingweight, flex, headsize, string pattern, construction, materials, design, and strings — combine to hit the ball with the greatest velocity, comfort, and control. Power potential is a measurement of a racquet's success at fulfilling its life's purpose. In a sense, this is all you have to know to choose a racquet with maximum performance — almost. 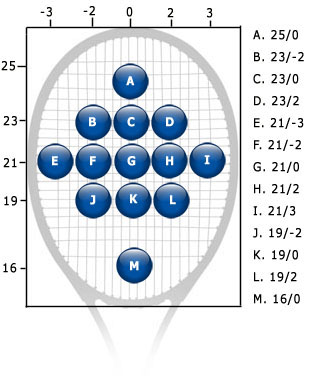 Tennis Warehouse has tested all the current performance racquets. We measure all the normal things, such as weight, balance, swingweight, and flex, but the most important thing we measure is POWER POTENTIAL — how much of the ball's impact speed is returned to the ball after impact. We measure power potential at 15 locations (but only show 13 on most illustrations) on the stringbed and give a special name to the power potential in four of these locations:

These locations map out the overall bird's eye view of the stringbed surface. On a closer, zoomed-in view, we have designated an area in the middle third of the racquet as the hitting zone (B, C, D, F, G, H, J, K, L). These named locations give us anchor points to use in talking about racquet power.

For example, the Babolat Pure Drive has the following power potential values: Sweetspot Power = 41%; Periphery Power = 20.5%; Tip Power = 22%; Throat Power = 51%. In other words, this racquet returns 41 percent of the ball's impact speed (combined racquet and ball speed) in the center, 22 percent three inches out from the center, 21 percent at the tip, and 51 percent in the throat. Surprisingly, the fastest shots do not come from the locations of maximum power (click here for explanation). Comparing racquets at the location where you actually hit is what is important. 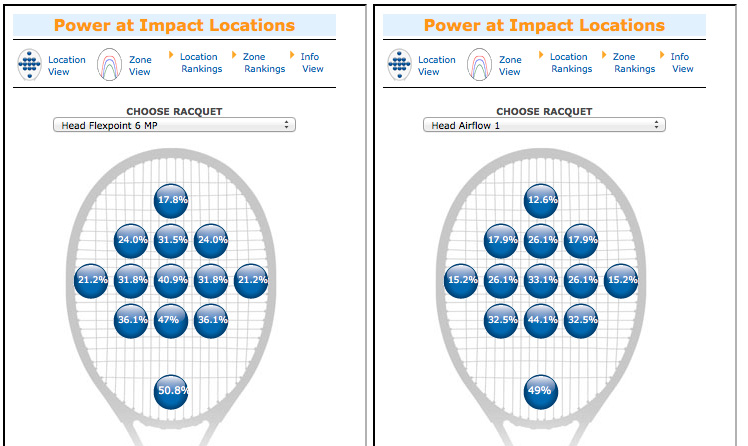 The maps are great, but you will also want to easily compare a racquet's power potential value at each location simultaneously with those of all other racquets. Below is an example of what this comparison looks like for location 21"/0" (location "G"). Change the location on the drop-down menu to see a comparison of power potential at other locations. 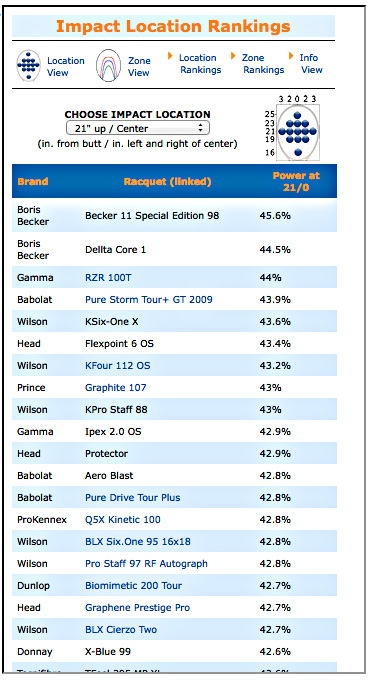 The comparison table lists the racquets from most power potential (most power) to least at any given impact location. But it does MUCH, MUCH MORE! Wrapped up in the power potential number is everything important you can say about a racquet — power, comfort, and control. To see why this is true, consider that during ball impact a racquet loses energy in the following ways:

All these events involve different kinds of racquet movement, or in other words, different types of instability. The more the racquet moves in any of these ways, the less energy it will return and the less stable it will be. High power potential also means high STABILITY. And greater stability means greater comfort and control. Stability contributes to COMFORT because your arm is not feeling the effects of all this movement, and it also influences CONTROL because ball impact is less likely to knock your racquet's aim off target. So a high power potential value also indicates high comfort and control. So, how do you use this magic number to choose a racquet?

How To Use Power Potential in Choosing a Racquet

Unfortunately it is not as easy as simply choosing the racquet with the highest power potential at the location where you make contact with the ball. There is a catch. More than anything else, power potential is determined by mass and mass distribution — in other words, on weight, swingweight, and twistweight. The so-called "best" racquet MAY NOT BE BEST FOR YOU. A racquet not only needs to be comfortable on impact, but it also needs to be comfortable to swing. Swingweight, as its name implies, is the most important variable when it comes to "swingability." The higher the swingweight, the more difficult the racquet is to swing. Baseliners generally like higher swingweights whereas serve-volleyers and junkballers often prefer lower swingweight. But what is best for you also depends on your physical strength and the efficiency of your stroke.

Step 2 — Power Potential. There are various ways to use the power potential values in selecting your racquet.

Step 3 — Identify Disqualifiers. Look at the specs of the racquets under consideration. Even if the power potential is out of this world, you don't want to choose a headsize, length, frame thickness, or any other characteristic that is not right for you, whatever the reason might be. For example, spin masters may not want a thick frame and touch specialists may like a softer flex.

Power potential is not an artificially created average rating scheme or made-up formula to substitute for lack of data. It is not marketing hocus-pocus or sales mumbo-jumbo. It is the experimentally determined "overall performance" of the racquet. The consequence of every atom that is put into a racquet is taken into account in the results. It is not just a "power" rating. It is an "everything" rating.