A racquet is a package deal. That is, any one technology is only one element of the total package. The advertised latest technology is just the ribbon. If you take any technology and willy-nilly put it into every existing racquet as is now constructed, it may or may not have a noticeable difference. Racquets are built as an integral set of relationships. The new technology is added to jazz up and differentiate the composite result. You can't market a racquet by saying, "This racquet is a great combination of great stuff." That's the truth, but it doesn't sell.

Every combination of stuff has a different feel and a different performance. In the player's mind, the feel usually trumps the performance. But then, to justify the choice of racquet, the player will develop an elaborate performance mythology to support it. Different players will have different opinions of how they think a racquet performs. That is the beauty of developing product that depends on its fit with the user. The objectively measured "best" by some category such as weight, balance, swingweight, or rebound speed is meaningless if a player does not like it, whatever "like" means.

But still, the fascination with the parts of the package persists. Everyone wants to know the swingweight, weight, balance, stiffness, etc. of the racquet. Knowing the "specs" allows players to make predictions about performance and feel, and marketing feeds this quest by proclaiming, "Our alpha gizmo makes the frame stiffer, giving it ultimate power," or "Our gizmo expands the sweetspot for supreme power and feel."

But now, with TW's power potential measurement of performance, we can compare the individual specs of the frame with actual performance. The program at above-right allows you to make this comparison for any spec, for any shot situation, and at any location on your racquet. By playing with this program, you will see that power performance is a combination of factors that add together. A racquet possessing the ultimate quality for one spec may be neutralized by another spec that is not so ultimate. That is not a weakness of the racquet, however. That combination is designed to achieve a specific performance with a specific feel. 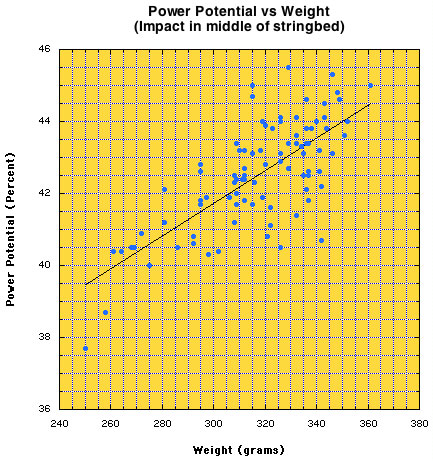 Does a heavier racquet always hit the ball faster? No. It is true that adding more weight to any given racquet will hit the ball faster (how much faster, depending on where the weight is added), but weight in itself is not predictive of power when comparing one racquet to another.

By experimenting with the program at above and looking at the graph below, you can see that some mighty big sticks produce relatively less mighty shot speeds compared to lighter racquets with a different total combination of specs — most significantly, specs concerning the distribution of the weight.

Balance is an indicator of weight distribution, though not a particularly useful one when it comes to power. You can have a low-balance, high-swingweight racquet or a high-balance, low-swingweight one. Similarly, you can have a very high balance racquet with a very low weight, and vice versa. A one-ounce racquet can have the same balance point as a 14-ounce racquet. Or you can have racquets with the same balance with all the weight located near the middle of the racquet, or all the weight located at the two ends. The latter will be much more powerful than the former, even though they have the same weight and balance. In fact, as you try different combinations in the program above, you will find many lower balanced racquets with the most power. In such cases, it is not the balance that is creating the power. It is the total distribution of each little "piece" of the weight. Of course, balance is relative to the length of the racquet also. 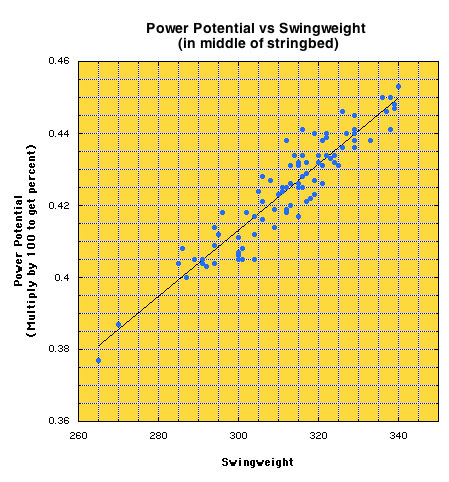 Swingweight is a two-faced property. If it is low, you call it maneuverability. If it is high you call it stability. More than any other spec, swingweight demonstrates a general trend of "more is better" when it comes to power.

Swingweight is a measurement of a racquet's resistance to being rotated about an axis going through your hand. A low swingweight makes it easy for the player to swing the racquet (maneuverable). But it also makes it easy for the ball to move the racquet, resulting in loss of power. Racquet movement is the biggest culprit in loss of power. Swingweight is determined by both the amount of mass and its distribution in the racquet — distribution being much more important. The farther an amount of mass is located from the hand, the more effect it will have on stabilizing the racquet.

Using the program and looking at the graph at right, you can see there is definitely a general trend of greater swingweight resulting in greater shot speed. It is certainly not a one-to-one correspondence, but it is the closest static parameter there is to estimating which racquet would be more powerful.

A stiffer racquet will not bend as much as a more flexible one. Bending loses energy because the frame does not snap back by the time the ball leaves the strings. By using the program above, you will notice that frame stiffness seems to matter least just below the center of the racquet and most near the tip. Near the center, specifically at the so-called "node of oscillation" (or "no vibration sweetspot"), the racquet will not bend when the ball hits it. Therefore, at those locations the program will list a few very soft frames with a lot of power closer to the top of the list. At the tip, where the frame wants to bend the most, stiffness is more important and you see stiffer frames percolating to the top of the list. 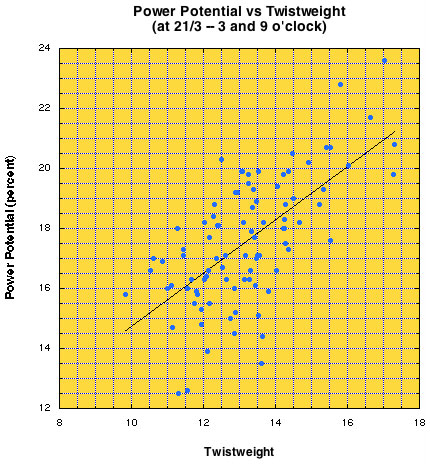 On off-center hits, the racquet will spin like a top. This is not to be confused with the frame's twisting like a Twizzler that occurs due to more or less torsional frame stiffness. Twisting is an acceleration of the entire racquet about its central tip-to-butt axis (longitudinal axis).

But as usual, when it comes to actual power performance, our rules of thumb are only that. For example, a high twistweight, large-headed racquet may also have a low swingweight. So even though it is stable right-to-left, it is unstable tip-to-butt. When it comes to power, movement in one direction can cancel stability in another, or contrariwise, stability in one direction can more than make up for instability in another. The graph at right shows that there is a relationship between power and twistweight on off-center hits (impact at 3 o'clock), but the relationship is not as strong as with swingweight.

Headsize goes hand-in-hand with twistweight. A larger head puts the weight farther away from the long axis and makes it more difficult to move the racquet about that axis. That is why the sweetspot is bigger on larger racquets — off-center hits generally cause less twisting at a given location compared to smaller racquets. But not always. Smaller headsizes may not have the weight located as far from the axis, but there may be more of it, making up the difference.

On center-line hits, a larger racquet in and of itself should not make any difference in power. In fact, you will notice many, many mids and midpluses near the top of the shot peed list along the center of the racquet. That is because they have high swingweight. In fact, many so-called player's racquets are near the top. These are usually characterized by higher weight and swingweight and lower headsize, balance, and stiffness. It is the swingweight that more than makes up the difference to result in higher power potential.