The flex ratings of hockey sticks provide a useful guide to the flexibility of a stick but they can also be confusing or even misleading. The first problem is that an increase in flex corresponds to a decrease in flexibility. That is, as the flex rating increases, the flexibility decreases or the stiffness increases. Another problem is that the flex usually varies along the stick. Furthermore, it is hard to find a clear definition of what is actually meant by the term "flex". Everyone agrees that the flex is the force in lbs needed to bend a stick by one inch. If it takes 85 lbs, then the flex is 85. Practically everyone agrees that cutting a stick shorter by 2 inches will increase the flex by about 10 units. The first statement is partly correct but the second statement is wrong.

The ends of the stick extending beyond the two supports do not bend at all. If 2 inches are cut off the butt end then the flex will not be affected. Exactly the same force will be needed to bend the 1.0 m middle section by one inch. However, if you cut a stick 2 inches shorter, then you will probably move your hands closer together when swinging and bending the stick. That will make it harder to bend the stick, regardless of whether you cut the stick short or not, so it will feel like a stiffer stick, even though the flex of the stick itself is not altered when it is cut shorter.

2. Flex variation along the shaft

Some sticks are more flexible at the blade end, some are more flexible at the handle end, and some are more flexible in the middle. The flex rating of a stick is just the average flex over a 1.0 m long section in the middle. In order to measure the variation in flexibility along the shaft, the authors took a sample of 13 high performance sticks and bent them over five different 0.6 m long sections from one end to the other. Each section started 0.2 m from the next and overlapped the next section, as indicated in Fig. 1. A vertical force, F, was applied in the middle of each section, as indicated by the arrow, and the vertical deflection, y was measured in order to calculate the stiffness k = F/y of each section. The deflection, y, was only about 5 mm in this test since a deflection of one inch over each 0.6 m length could easily have broken the stick. 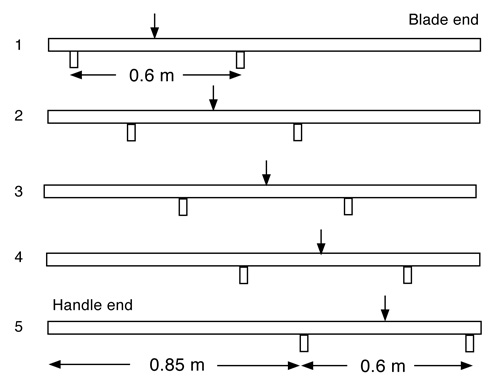 Figure 1 — The five sections of the stick used to measure the flex. The 60 cm flex zones started at 5 cm from the end of the stick and progressed down the stick in 20 cm intervals. 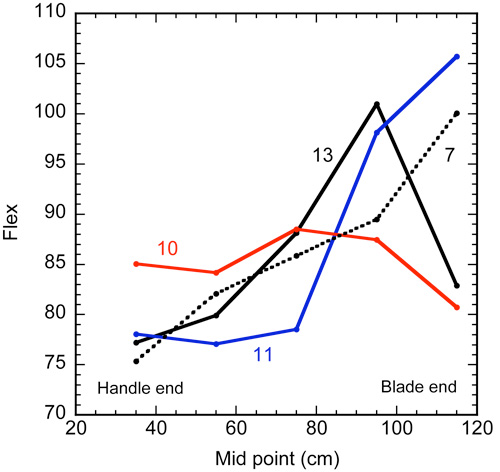 Table 1 — Flex of each stick at 5 locations as measured in the middle of a 60 cm span. The 60 cm flex zones started at 5 cm from the end of the stick and progressed down the stick in 20 cm intervals.

The kick point is usually described as the point on the shaft that flexes or bends the most. However, photographs of bent sticks show that the stick bends most at a point close to where the player pushes on the stick with the lower hand. The photographs are not telling lies.

Figure 3 — Bending shape of a stick supported near each end. 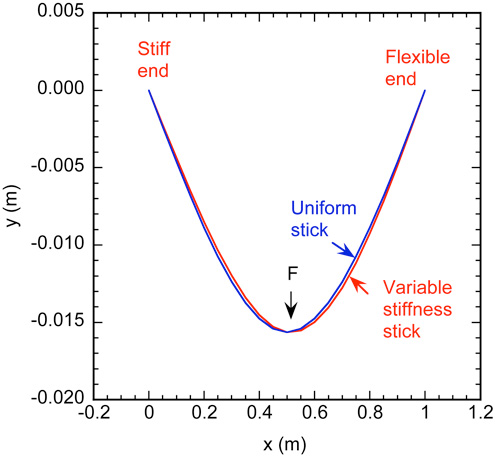 Figure 4 — Bending shape of a uniform stick compared with one that is twice as flexible at one end than the other. In order to show the difference more clearly, the y scale is magnified compared with the x scale.

Suppose that a stick is twice as flexible at one end than the other, the flex increases smoothly from one end to the other, it rests on two supports 1.0 m apart and a force is applied in the middle. Calculations show that the shape of the stick is almost the same as that in Fig. 3 and the stick remains straight at both ends. The more flexible region bends slightly more than the stiffer region, as shown in Fig. 4, but the difference would be very diffcult to detect by eye. 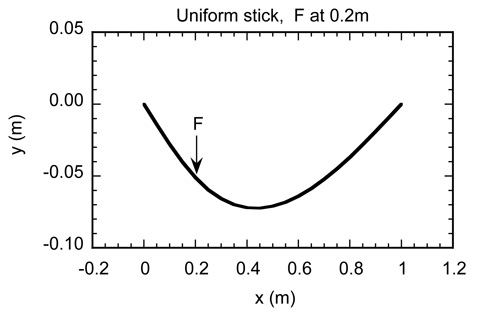 Figure 5 — Bending shape of a uniform stick, with supports separated by 1.0 m, when the bending force is located 0.2 m from the left hand support.

4. Stiffness of a hockey stick

When a player strikes a hockey puck, a force is applied at the bottom end of the stick and the stick is supported by the hands, one near the handle end and one near the middle. Consequently, the situation shown in Fig. 3 is not directly relevant. A more relevant flex or stiffness measurement is the one shown in Fig. 6, where the handle end is inserted between two rods located a distance L1 apart and a load is applied at the blade end. For a stick of uniform stiffness, the deflection, D, at the blade end is given by

where EI represents the bending stiffness of the material used to construct the stick, and L = L1 + L2 is the length of the test region. E is Young's modulus for the material and I depends on the shape of the material (width, wall thickness etc). For example, if L1 = L2 = L/2 then

In Fig. 3, the deflection at the middle of a uniform stick is given by 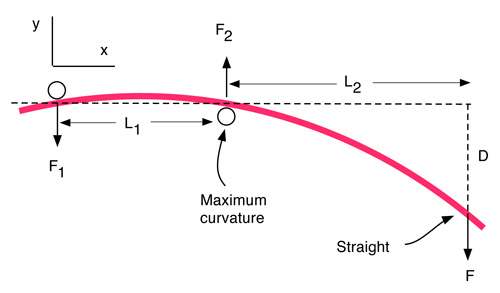 Figure 6 — Bending shape of a uniform stick, with supports separated by a distance L1, when the bending force is located near the blade end of the stick.

The stiffness of each of the 13 sticks was measured using the arrangement shown in Fig. 6 with L1 = 50 cm and L2 = 86 cm. The deflection at the blade end of the stick was measured by hanging a 5.35 kg mass on the blade end. The deflection varied from 59 mm for the stiffest sticks (sticks 6 and 12) to 68 mm for the most flexible stick (stick 9). Consequently the stiffness varied from 770 N/m to 890 N/m in this test. If L1 was longer and L2 was shorter, then the stiffness of each stick would have been larger, meaning that it would be more difficult to bend a stick if the bottom hand is moved further down the shaft.

When a player strikes a puck, the stick bends by an amount that depends partly on the force exerted on the stick by the player and partly on the the force exerted on the blade by the puck. After reaching its maximum deflection, the stick then starts to straighten out, gaining speed at the blade end as it does so, and giving the puck an extra kick forward. There are two separate aspects of this process that are of interest to players. One is the time that it takes to release the stored elastic energy in the stick, usually called the release time. The other is the extra speed given to the blade and the puck as a result of the energy release. The extra speed depends on the amount of elastic energy stored in the stick, so it depends on how far the stick is bent.

The release time does not depend on the amount of energy stored or on the actual bend in the stick. It depends on the mass and the stiffness of the stick. If the stick is stiff then it will spring back to its straight position quickly. If the stick is heavy, especially at the blade end, then it will spring back slowly, regardless of the actual bend in the stick. One way to measure the release time is to measure how fast the stick vibrates back and forth when it is clamped. Those vibrations are normally damped quickly when a player is holding the stick, but can be felt as a sting in the hands immediately after striking the ice or the puck. However, if the stick is clamped firmly at some point along the shaft and if the blade is pulled down and then quickly released, then the stick will first straighten out and then bend in the opposite direction since the stick reaches maximum speed as it returns to the straight position.

To conduct this test, each of the sticks was clamped in a horizontal position at the handle end and also at a point 50 cm from the handle end so that middle of the blade was located 86 cm from the 50 cm clamp point. The blade was then pulled down by hand a distance of about 9 cm and quickly released, causing the blade to vibrate up and down about 11 times per second. Each complete vibration cycle therefore took about 0.09 seconds. The time from the lowest to the highest point was half that, or 0.045 seconds, and the time from the lowest point to the straight (horizontal) position was half of that again, or 0.0225 seconds. It is the latter time that is of interest, although the actual release time is longer since the puck adds to the total weight of the blade and the shaft and slows down the release. The release time, based on the measured vibration of each stick, is shown in the above Table 1. There was a surprisingly small variation between sticks, most with a release time between 22 and 23 milliseconds. It is doubtful that an extra one millisecond in release time would be noticed by a player.

It is interesting to compare the amount of elastic energy stored in a hockey stick with the energy given to the puck. The kinetic energy of any object of mass m and speed v is 0.5mv2. For a 170 gram puck traveling at 30 m/s (67 mph), the kinetic energy is 76.5 Joules.

When a player bends a hockey stick, the stiffness of the stick is typically about 1000 N/m depending on where the player holds the stick. When the stick strikes a puck, the stick bends even further at first and then straightens out as the elastic energy stored in the stick is transferred to the puck.

The elastic energy stored in the stick is given by 0.5kx2 where x is the deflection. For example, if k = 1000 N/m and x = 0.2 m, then the stored energy is 20 Joules. In theory, that energy could be used to launch a puck at a speed of 15.3 m/s since the kinetic energy of the puck would then be 20 Joules. However, part of the stored elastic energy is used to accelerate the stick itself. If the bent section of the stick weighs 0.17 kg, and the puck weighs 0.17 kg, then roughly half the elastic energy will be given to the puck and the other half is used to accelerate the stick.

Suppose that the puck accelerates to 10.8 m/s and ends up with 10 Joules of kinetic energy. It was accelerated over a distance of 0.2 m and traveled that distance at an average speed of 5.4 m/s so it took 0.037 s to reach maximum speed. That is the release time of the stick. The release time can be shortened by using a stiffer stick or by moving the bottom hand closer to the blade so the stick bends over a shorter length.

The puck speed that can be imparted just by bending the stick is not very large. More commonly, players push or flick the stick forward while bending it, in order to increase the force on the puck. Even higher puck speeds result when the stick is first accelerated and then collides with the puck.