Weight is the resistance to movement in a straight line. Lifting is an example. The racquet resists (does not move) your lifting efforts until you pull with a force equal to its weight. Then you can lift it. Weight is what you feel if you pick the racquet up by the tip or handle while allowing the opposite end to hang straight down to the ground. Weight is also what you feel if you pick the racquet up at the balance point. Weight influences balance and swingweight, but by itself, pure and simple, it is rarely what the player is directly experiencing when interacting with the racquet.

Unfortunately, "head-light" or "head-heavy" does not actually mean one end is lighter or heavier than the other, but just that the mass of the materials is spread out in such a manner that the short side of the balancing racquet behaves heavier. The way it works is that a smaller bit of weight at a great distance from the balance will counter balance a bigger bit of mass at a lesser distance from the balance point.

What is important to know about balance is that the racquet behaves as if all the mass were located at the balance point. That is why it is also sometimes called the center of mass. For equal weight racquets, the closer the balance point (center of mass) is to your hand, the less force (torque) you need to hold the racquet up horizontal to the ground (holding at the handle). 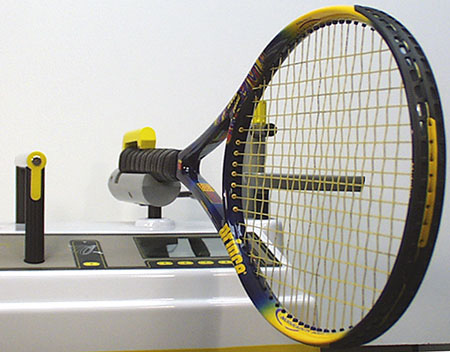 So the tradeoff becomes this: lower swingweight results in greater racquet acceleration and final swing speed, but more shock (due both to more racquet deceleration by the ball and higher impact force due to greater speed). Higher swingweight results in slower racquet acceleration and final swing speed but less shock due to less deceleration due to the ball pushing the racquet in an opposite circular rotation.

The beauty of customization is that you can easily experiment and find the best tradeoff for your style of play.