Shot speed depends both on the power of the racquet and the speed of the racquet. Obviously, any racquet, no matter how powerful, always hits the ball faster when it is moving faster. Equally as obvious, two racquets of equal power but of unequal speeds will have different shot speeds, and, likewise, two racquets of equal speed but unequal power will have different shot speeds. 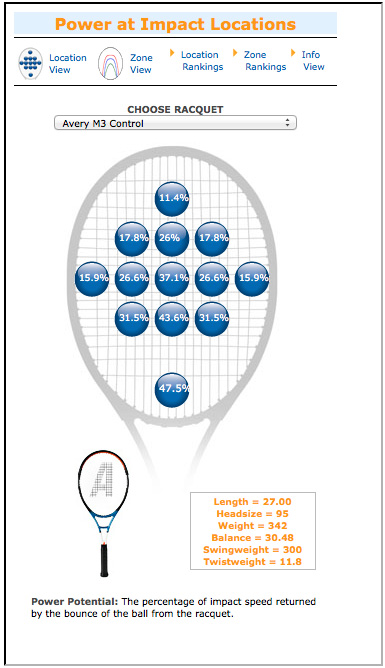 The maximum possible shot speed thus depends on hitting the ball at the location with the best combination of power and speed. For most shots, that occurs from the center of the stringbed to 2 or 3 inches above center.

But why do locations differ at power and speed and how do they add up to determine the maximum-shot-speed hitting location? Let's discuss power first.

The power potential depends on the "local" hitting environment with regard to three primary factors: weight, frame stiffness and stringbed stiffness. Weight is the most important factor. A racquet behaves heaviest at the intersection of two balance points: the butt-to-tip balance and left to right along the long axis. The racquet acts as if it is its full weight at that point. That is because it does not spin side-to-side or somersault backwards when an impact occurs there. It simply bounces straight backwards, or it slows down if moving when the impact occurs. The balance point is typically close to the throat area of the stringbed. Therefore, that is the most powerful area of the racquet. You will notice that for some racquets with balance points around 35 cm (13.75 inches) or so, the hittingweight is very close to the actual weight (Dunlop M-Fil 800 is a good example). The throat impact location is actually at 16 inches. 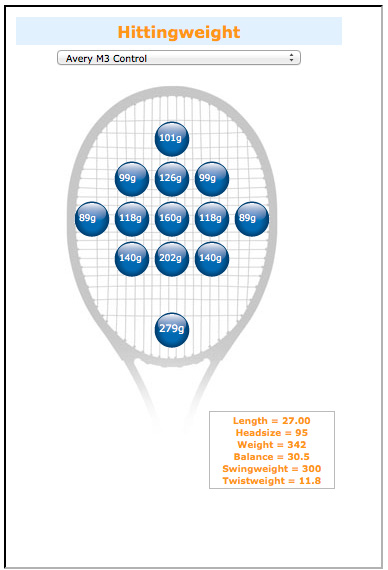 A racquet acts lighter than its full weight at every other point. The further you hit to the left or right, the faster the racquet spins on impact. The further you hit up or down, the more it recoils in a forward or backward somersault. Both of these motions are in addition to the straight backwards movement that occurs on all impacts. This means that depending on the hitting location, the racquet's backward acceleration will be the sum of the spin, somersault and linear accelerations. The faster a location is accelerating backwards, the lighter it behaves. That is perfectly logical. When you hit a light object with a stick, it flies off faster than if you hit a heavy object. When you hit a "light" location with a ball, it flies off (or slows down) faster than if you hit a "heavy" location. The location acts as if it is lighter or heavier depending on all these motions. We call that location-relative weight the "hittingweight" (or "effective weight"), and it can be calculated as shown below. Simply choose a location and the program will calculate every racquet's hittingweight for impact at that location. The results are sorted by power potential (column 3).

Hittingweight depends on the weight, balance, swingweight, and twistweight of the racquet. Racquets with higher values for these specs will have higher hittingweights. However, if you hit along the lengthwise center line, then twistweight will not come into play. You can see that by choosing a location with 0 off-center value. You will see that many racquets with very low twistweight have high power potential and hittingweight in that case. In general, impacts near the tip at 25/0 will have hittingweights of about one-third the actual weight, near the center around 21/0 it will be about half the actual weight, and near the throat at 16/0 it will almost be at full weight (90% or so).

An interesting consequence is that on some racquets the very tip of the racquet may have a hittingweight of about 60 grams. That is about the weight of a tennis ball. In this case, if a ball were to hit a stationary racquet at that point, the ball would come to a complete standstill and the racquet would rebound. That is what happens when a moving object collides with another that is stationary and of equal weight. A good example of this is the "Newton's Cradle" toy with the steel ball pendulum that swings into four other balls, comes to a complete stop, and sends the last one in line into a rebound. In such a case, the power potential of the impact location would be 0%.

Weight is the main ingredient in power so we will only deal very briefly with frame and stringbed stiffness. We can sum up "local" frame stiffness with an analogy. A diving board bends more when you jump on the end rather than the middle, and it twists more if you jump to the side rather than the middle. It is the same with ball contact on the racquet. Backward bending and torsional twisting both add to the backward motions of the location, making the racquet behave lighter. Energy losses are also involved due to the racquet deformations not "snapping back" in time to help launch the ball.

The local stringbed conditions work differently. In the middle of the racquet, the cross and main strings are longer and stretch more upon impact, cushioning the ball more and thus losing less energy due to ball deformation. Off-center, the strings are shorter, and shorter means stiffer because there is not as much string to stretch. Also, hitting off-center also means dividing the impact strings into a short segment and a long segment. The short side closest to the frame will stretch less than the long segment. This combination may make the stringbed stiffer in that location also. A stiff stringbed deforms the ball more upon impact. More ball deformation means more loss of energy because the ball loses almost 50% of the energy that goes into deforming it.

Racquets are usually swung in an arc. An arc is a curved segment of a circle. A tennis swing might actually be composed of circles upon circles with one center located at the wrist, another at the elbow, and another at the shoulder. That complicates the picture, but biomechanics researchers have determined that the three circles add up as if they were one circle with a center about 10 cm up the forearm from the wrist. So we imagine a racquet sweeping a circle with a center at that location.

Analogy is again the best teacher. Imagine a typical merry-go-round. As the horses on the outside go round-and-round, they trace a circle and travel a distance equal to the circumference of that circle. The horses on the inside do the same. However, the inside horses trace a smaller circle and travel a shorter distance. But both horses travel their respective circles in the same time. The horses are still "neck and neck" in relation to the finish line. If a horse is situated right at the center looking at its two friends, it traces no circle, but it spins on a point but with its line of sight fixed permanently on the other two horses. All three horses are traveling (rotating) at the same angular rate (as in revolutions per minute) even though they are all traveling at different linear speeds as witnessed by their different distances traveled. 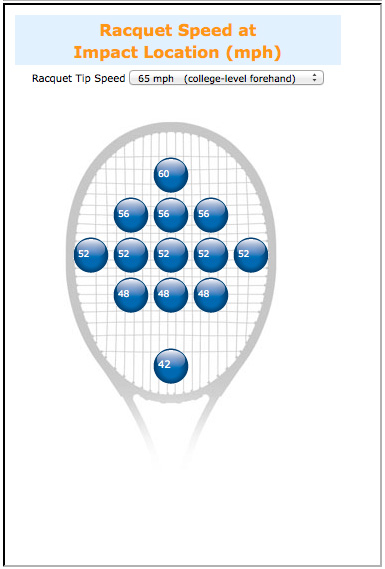 The same relationship occurs between different hitting locations on the racquet. Locations toward the tip of the racquet travel faster than those near the throat. How much faster? Use the tool above to experiment. Simply choose the tip speed (the tip is the common reference point from which racquet speed is determined), and the tool will calculate the impact location speed of the racquet. You will see that there can be huge differences in racquet speed between the tip and the throat (almost 40 mph for 135 mph tip speed). Also, even between adjacent impact locations you can have a difference of 1-5 mph. 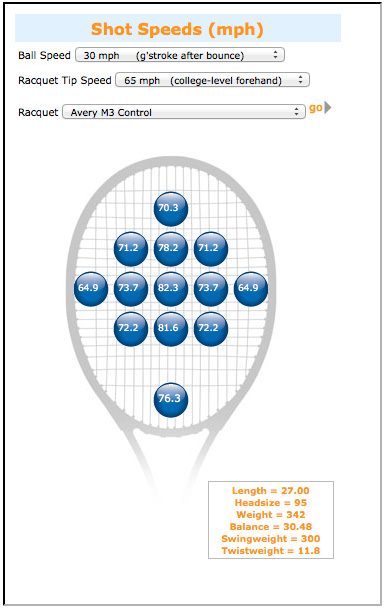 For example, if you choose 80 mph tip speed, you will see that the racquet travels about 5 mph faster at 25 inches than it does at 23. However, from the hittingweight program above, you can see that the power potential declines about 10 points between those locations. In the end, as explained elsewhere, the shot speed is determined as follows:

So, you can see that racquet speed has a greater role in determining shot speed than does power potential. So as the hitting location moves toward the tip, the increased speed rapidly makes up for the loss in power. However, this can only go so far. You can only swing so fast, and you only want to swing something less than as fast as you can. After all, you still want the ball to go in the court. Within the constraints of reality, then, as you get too far toward the tip, you start losing shot speed because at this point the power decreases faster than you want or can increase the racquet speed.